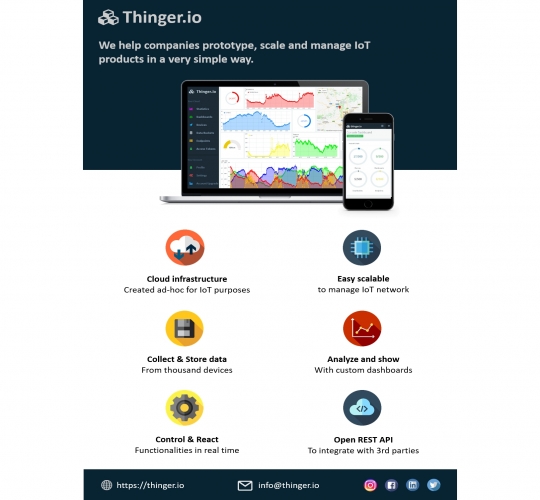 THINGER.IO is an Open Source IoT Platform created in 2016 in Spain to streamline the development of connected projects by means of resilient Software and Hardware tools that allow to prototype, scale and manage connected products with low development costs and timings.

Adopted by more than 50.000 developers from 182 countries, Thinger.io is one of the most widely used IoT platforms in the world. It has been applied in thousands of projects related with Smart Buildings, Environmental Monitoring and Infrastructures Digitalization. It is also a widespread platform for educational purposes because of its simplicity and agnostic technology orientation.

Thinger.io IoT Platform is a Cloud Edge-to-Edge Platform that simplifies the main milestones of a connected project separated in three feature groups:

An Advanced Data System (ADS) provides features to store, analyze and show IoT data using customizable dashboards based on web technology, compatible with every media supports. In addition, Thinger.io provides a File System that allows complementing IoT data with operational information from the company behavior or other unfamiliar data sets.

A Marketplace of multiple plugins allows simplifying the integration of the IoT data with third parties and extending the platform capacities with other software such as Node-RED rule engines, Graphana Analytics, or even implementing additional data sources from other internet providers.

Any kind of product/service IoT based developers, IT consultancies, researches and others that need fast prototyping over an IoT infrastructure.

Supplier
Exosite
Exosite is a technology company focused on connecting devices and systems. They have been developing embedded technologies for over 20 years - and have first-hand experience dealing with the lack of connectivity between devices, networks and users. Year founded: 2009
Learn more 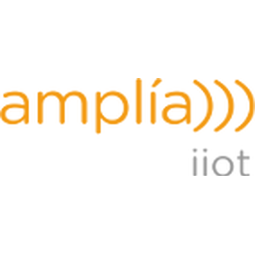 Supplier
Amplía
Amplía is a spanish company specialized in wireless communication solutions and software engineering with a clear focus on consultancy and deployment and pioneers of Internet of Things solutions. Their aim is to help companies to deploy Industrial IoT solutions based on reliable wireless infrastructure. Year founded: 2002
Learn more 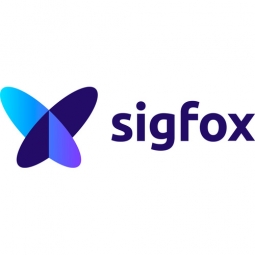