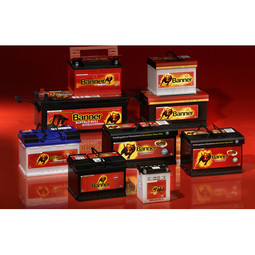 For optimum control of product quality, Banner relies on a high production depth. Its 560 production employees produce nearly all the components in¬-house that they need to make finished batteries on Banner’s six assembly lines. This includes the plastic parts for the battery cases as well as the paste-filled lead oxide grids. Their production involves two to five¬ days rest in maturing chambers to create optimum current absorption and storage capacity. Banner’s ongoing success was accompanied by a continuous, organic growth of the production facilities, adding or extending hall after hall until the complex filled the site that had seemed ever so spacious when the company moved here from a smaller place in 1959. These developments led to a heterogeneous production environment. “This confronts us with significant challenges, particularly concerning intra¬logistics issues, such as scheduling for the maturing chambers,” says Franz Dorninger, technical director at Banner. “We contemplated various ways to overcome this problem, including relocating to new premises.”