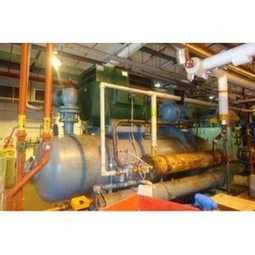 Johnson Controls has advised Jaguar Land Rover on matters relating to the service, maintenance and repair of the Heating, Ventilation, Air Conditioning & Refrigeration (HVAC&R) systems installed at the Gaydon Centre for almost 20 years. In 2012 we were invited to submit a proposal for replacement of the evaporator installed in the Climatic Wind Tunnel. In a ‘Site Survey Report’ submitted to Jaguar Land Rover, we drew their attention to the key factors that we believed were behind the evaporator’s less then optimum level of performance. The bulk of these stemmed from the fact that the existing evaporator was over 20 years old and throughout its working life a number of design changes had been made to the overall system that it formed a part of, thus rendering it no longer fit for purpose. Examples of such key factors included: • The old evaporator’s level of performance was now too ‘industrial’. It was capable of operating within a temperature range of -40°C and +55°C, while projected requirements were for a temperature range of between -10°C and +50°C. • Our concerns were raised over the suitability of the existing heat transfer fluid being used, which was proving to be highly corrosive. • The old evaporator was still operating on the soon to be banned R22 refrigerant. The use of all HCFCs for the service and maintenance of HVAC&R systems will become a criminal offence from 1st January 2015.